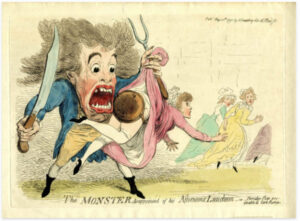 The Monster going to take his Afternoons Luncheon (etching by James Gillray 1790) The victim is wearing a copper cuirass over her bottom to protect her from his attack.

Almost everyone has heard of Jack the Ripper, the villain who wandered the streets of London in 1888, killing prostitutes in the dead of night. Few people are aware, however, that he had a predecessor, a sexual miscreant who terrorized those same streets exactly one hundred years earlier. Although he did not have a predilection for prostitutes, his weapon of choice was the same. That man was known as The London Monster. 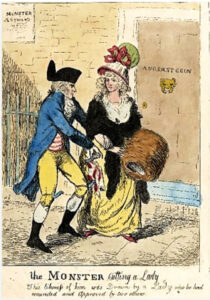 The Monster Cutting a Lady (print by Isaac Cruikshanks 1790) He is seen here with a blade in his hand and blades attached to his knees, attacking a lady.

His reign of terror lasted from March 1788 to June 1790. Within that timeframe, he attacked approximately 56 women. This number remains in question, however, because many believe some of his attacks were not reported and others were fabricated. But more on that later.
In 1790, London was a highly sexualized city. There were over 10,000 prostitutes, women of all ages from various backgrounds, many of whom were wives trying to earn an extra shilling or two to help with household expenses. Brothels and molly houses existed in every part of town from Pall Mall to Charing Cross and Drury Lane and, of course, in Covent Garden. Erotic novels, vulgar songs, and pornographic prints abounded. Members of all classes frequented live shows with both male and female nude dancers. Naturally, the sexual malignance of the city brought with it crime and corruption. In essence, London was rife with whores, vagabonds, and thieves and, therefore, was the perfect place for the monster to thrive. 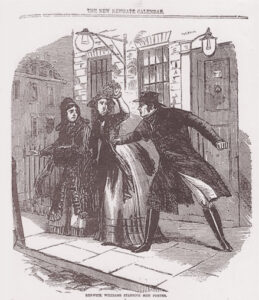 The London Monster stabbing Miss Anne Porter (age 21), her sister Sarah (age 19) beside her. (drawing from The Newgate Calendar 1790)

Over time, the monster’s modus operandi evolved. As the story goes, he approached only beautiful women with a comment, many times of a sexual nature, which was met with reproach and disgust. His actual words were said to be so indecent that the women who reported his attacks wouldn’t repeat them. In the testimony of two sisters—Anne and Sarah Porter—they accused him of using “very gross,” “dreadful,” and “abusive” language so, out of decency, much of what he said was never disclosed in the court transcripts. He would insult, abuse, and cut his victims with a knife, sometimes slicing through their gowns and into their flesh. Some claimed he had a sharp object connected to his hand or knee and would use it strategically in the assault. Most of the time, the point of impact was in the hip, thigh, or buttocks, some suspecting those areas were targeted with sexual intent. It wasn’t until April of 1790, that one of his victims was sliced through her nose when he asked her to smell a nosegay with a sharp object hidden inside. All of these varied attacks stirred up an hysteria that led women to wear copper cuirasses underneath their skirts that covered their backsides, should the monster attack.

Men everywhere started to worry over their wives, sisters, and daughters, demanding that the villain be caught. As a result, John Angerstein, a wealthy insurance broker and art collector, offered a reward of 100 pounds—50 pounds for the capture and arrest of the monster and the remaining 50 pounds once he was convicted. This brought about a slew of vigilante monster-hunters roaming the streets at night, accusing and restraining innocent men throughout London. Angerstein pasted posters all over the city with various descriptions of the monster, all obtained from the victims and witnesses, and none of which quite matched. He eventually acknowledged the frenzy he created over finding the monster, ironically stating that “it was not safe for a gentleman to walk the streets, unless under the protection of a lady”.
Because of this hysteria, historians believe many of the attacks may have been fabricated. As the monster was known to attack only beautiful women, several women were suspected of slashing their own gowns and mildly injuring themselves to gain social celebrity. Essentially, it became a statement of one’s great beauty and, thus, an “honour” to have been selected by the man. These victims often reclined in their parlours, inviting curious visitors to take a peek at the gash or scratch where blade met flesh. During the height of the hysteria, the reports were numerous.

If you read The London Monster, you’ll see that someone was arrested for these crimes. But was he really the culprit? Hmmmm . . .