Death by hanging was used as a form of capital punishment in England as early as the fifth century. Other methods of execution found their way into history over the years as well, yet never managed to maintain the longevity of death by hanging. Castration, blinding, beheading, boiling, burning, and dismemberment all made an appearance in England between the time of William the Conqueror and the 18th century when hanging became the favoured method of punishment. Even children as young as seven were subject to pay for their crimes at the end of a rope. 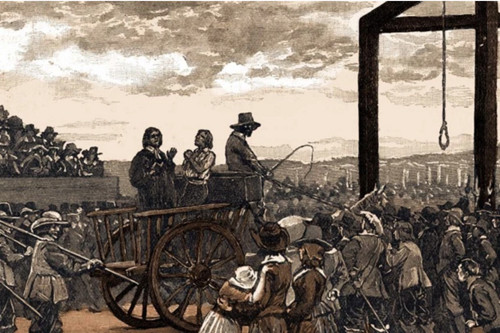 A 17th century hanging at Tyburn.

Those unfortunate enough to find their necks in a noose prior to the late 19th century, when the long drop was introduced, would die from strangulation, as the height of the drop was not long enough to snap the neck. Once the long drop was employed, the actual cause of death was dislocation of the vertebrae and the rupturing of the jugular vein. But those who were fortunate to survive their hangings—be it through fate, good fortune, or divine intervention—were subjected to a different fate.

In the early 18th century, the British government mandated that anyone who survived his execution would either be hanged again, sent to the colonies, or set free. Although there are several recorded cases of convicted criminals surviving their hangings, the majority clearly did not. In a few cases, prisoners were accidentally decapitated during the process. But, as they say, accidents happen.

Those felons convicted of capital offenses—like murder—who didn’t survive their hangings, were additionally gibbeted or “hanged in chains” and placed on display after their deaths as carrion for birds and rodents. Like placing a traitor’s head and other body parts on the point of a pike and displaying them for all to see, gibbeting was used to warn citizens to behave within the confines of the law. The Murder Act of 1752 reinforced the practice of gibbeting. It was created “for better preventing the horrid crime of murder” and that “in no case whatsoever shall the body of any murderer be suffered to be buried” but instead be hanged in chains or publicly dissected. This punishment was mandated until 1834, when the Act was abolished.

Gibbeting involved moving the corpse to a new location to be displayed on a gibbet. The placement of the gibbet and hanging cage were of utmost importance, as the ideal location would be one that was easily seen or frequented. In some cases, gibbets were located at or near the scene of the crime. This could be a rather unpleasant experience for those who lived nearby or owned a business in the area since the offensive stench of rotting flesh traveled at the whims of the wind.

The mid to late 18th century was a particularly popular time for gibbeting. Between 1730 and the turn of the century, there were approximately 293 recorded cases of criminal corpses being gibbeted in England and Wales. London, of course, had the most instances of gibbeting, likely due to the large population and social and economic problems of the time.

Typically, a body was gibbeted within a couple of days of the execution unless it had to be transported to another place. The poles were quite high—20 to 30 feet—and sometimes studded with spikes or nails around the bottom so the corpse could not be tampered with. Since bodies could be displayed for years within these cages, it was rare that any were ever reused. 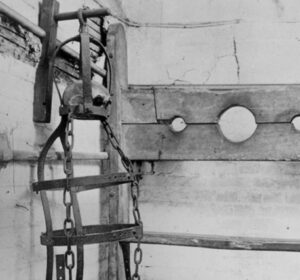 Gibbet irons that include John (the butcher) Bread’s skull fragment. He was convicted of murdering the town’s Deputy Mayor in 1742. (Rye Town Hall)

Gibbet irons were shaped like the human body so that the bands would help the decaying form keep its shape over time. On occasion, the smith who fashioned the cage would travel to the place of execution to measure the accused’s proportions, ensuring a good fit. Once that was established, the smith could then solder or weld the irons shut over the corpse. For this reason, it was possible that a body could be furthered desecrated by the smith as seen in the case of Stephen Walton, whose skeleton was discovered buried in Norfolk in 1899. The skull had clear scorching marks on it where it had been burned by a hot iron.

Gibbet irons that include John (the butcher) Bread’s skull fragment. He was convicted of murdering the town’s Deputy Mayor in 1742. (Rye Town Hall)

Female criminals were not gibbeted like male criminals. Because there was an increased interest in the female anatomy, women’s cadavers were often sold to anatomists and surgeons for research through dissection.

In 1868, approximately 30 years after gibbeting was no longer practiced, the last public hanging took place. Future executions were mainly performed within prison walls. It would be a long time before hanging would disappear completely from the British justice system, the last one happening in 1964.