In 1788, exactly one hundred years before Jack the Ripper terrorizes the people of London, a sexual miscreant known as the London Monster roams the streets in search of his next victim. Thomas Hayes, having lost his mother in a vicious street assault as a child, becomes an underground pugilist on a mission to apprehend him. He is aided by Sophie Carlisle, a young journalist with dreams of covering a big story but who must masquerade as a man to do it. Together, they form a plan to catch the monster, but it will be costly. To earn the money to pay a band of vigilante mollies, Tom must win his fights. The more he wins, however, the more notoriety he receives, and the greater the chance of his identity being exposed—a revelation that could jeopardize his father’s political aspirations. As the attacks grow in severity and frequency, Tom must risk his anonymity in order to catch the monster. Little does he realize, the monster is also trying to catch him. Read below to discover interesting facts about some of the settings, people, and special topics in The London Monster.

Historically, the Old Bailey was the central criminal court of London where trials took place. This was convenient in that Newgate gaol was located adjacent to the building so prisoners didn’t have to travel far to attend their own executions, which of course, were open to the public. The trial for the London Monster was held here in 1790 and then again months later.

These gardens were first built in 1746 and enjoyed by the wealthy as an open-air space where many romantic interludes took place. Visitors would stroll along the ornamental lake and pathways, gaze into the fountain of mirrors, or dance at one of the music concerts held in the large rotunda. One of the most popular features was the nightly illumination which involved the simultaneous lighting of “magic lanterns”. 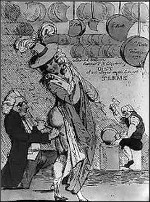 The hysteria over the Monster traveled throughout London, creating a need for women to protect themselves against his vicious knife attacks. The solution was for women to wear a piece of armor beneath their gowns that would cover their buttocks. Oftentimes these cuirasses were made from old copper pots that were melted down or banged into their new form. The picture on the left is of a woman being measured by a coppersmith for her new accoutrement.

Billingsgate is a ward in the city of London on the north bank of the River Thames. Known for being an open fish market with bawdy fishmongers shouting their wares, its name came to be synonymous with foul language. But other wares were sold there, too. Costermongers hawking oranges, lemons, and onions would also be found there.

The map to the left indicates John Roque’s plan for Billingsgate, dated 1746. The warehouses would have been located along Thames Street between London Bridge and Tower Bridge. They stored coal and salt as well as other commodities shipped from foreign lands.

This gentlemen’s club located on St. James’s Street founded in 1693, is considered one of the most exclusive private clubs in the world. It began as a hot chocolate emporium and then a teashop, before settling in as a men’s club. It was notorious for its wild betting on sports, politics, and most anything that could be wagered. Gentlemen of nobility and royalty have been members. Prince Charles and Prince William are currently members. 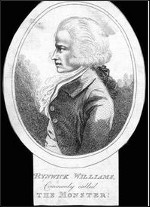 Rhynwick Williams was an unemployed, Welsh, 23 year-old artificial flower maker at the time of his arrest. He had a good education, came from a respectable family, and was a talented musician. He trained as a ballet dancer and violinist and even acted as a dancing master at one school. But after a few scandals and some unfortunate mishaps, he found himself destitute and living in a public house where he shared a bed with another man. He was arrested on June 14th, 1790, and tried for crimes of piquerism against dozens of women in London. Although he had an alibi and the alleged victims couldn’t identify him as the London Monster, he was convicted and spent six years in prison.

Henry Addington (1757-1844), 1st Viscount Sidmouth, became the Speaker of the House of Commons in 1789 and eventually served as Prime Minister. He was the son of William Pitt the Younger’s physician and was granted peerage when King George III gave him the title of viscount. Along with it, he was given a residence in Richmond Park known as White Lodge. He was a member of the Tories and was known for overhauling England’s tax system.

Currently the site of the Royal Ballet School, White Lodge was Lord Sidmouth’s home after he became Prime Minister. The home, built in 1727 as a hunting lodge, was in disrepair before King George III refurbished it and gifted it for life to Addington in 1801. Over the years, it has undergone various architectural ramifications, including the addition of two curved wings on either side of the main lodge. Addington died here in 1844 at the age of 86.

Located in Kennington on the south bank of the River Thames, these pleasure gardens were popular for almost 200 years. The charge to enter was nominal so that people from all walks of life could enjoy the strolling musicians, buskers, and acrobats. The Grove, a large open space near the entrance formed a Roman-style piazza where people could socialize, enjoy refreshments, or listen to music. Supper-boxes lined three sides of the Grove to provide a place for visitors to dine or watch performances in a partially enclosed space. Like Ranelagh, Vauxhall would light thousands of lights in an instant at the sound of a whistle.

This church, located in Westminster, was built in the early 18th century. Today it exists mostly true to its original form with the exception of a few newer details including replaced glass in the large window at the end of the nave, which was originally colorful stained glass. An enormous organ occupies the opposite wall behind the congregants. At the time I took this picture, the choir was practicing for an upcoming concert.

Although there have been several churches at this site over the centuries, the first being built around 1222, they bore little resemblance to what we see today. Over the centuries, Parliament and several kings–including Henry VIII and James I–have either rebuilt or reconstructed areas of the church and churchyard. Today, the front of the church​ is supported by six enormous Corinthian stone columns that stretch from one end of the steps to the other, creating a portico that extends north and south. The spire, adorned by clocks on all sides, reaches almost 200 feet high and houses a bell.

In 18th century England, the term molly house was used to describe a tavern, public house, or brothel where men in search of sexual pleasures with other men could meet. Although homosexuality was considered a capital offense at the time, these establishments abounded throughout certain areas of London. Men dressed as women or as men, engaged in sexual acts, marriage ceremonies, mock births, and other ritualistic practices within the molly house walls.

Established in 1747, this London hospital was the first to treat venereal disease, specifically syphilis when it became a growing health concern. Patients would go through a strict process of admittance and were then given a bed where they would endure mercurial treatments and salivations. The policy was to never readmit a patient, the desired outcome being that this would dissuade them from continuing with their ‘reproachable behavior’.

This hospital located in Bloomsbury Fields was established to educate and house orphans, regularly taking in abandoned infants in London. The children were placed with a wet-nurse in the countryside and after the age of four or five, returned for schooling. A mother would leave some sort of cloth or token with her infant that would serve to identify it should she inquire upon the child’s health or well-being.